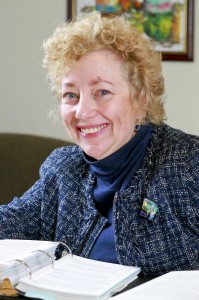 Katy Banahan grew up in Lexington, Kentucky. She attended the University of Kentucky where she obtained an honors degree in history, and confirmed her life-long devotion to Wildcat basketball.

In September 1984, she went to London, England on a three-month post-graduate study program. Partly in love with London, partly unsure how to get back to the airport, she stayed for 17 years. Prior to entering law school, she worked as a paralegal in London and as an egg gatherer on an Israeli turkey farm; law appeared to be the better career path. She graduated from London Guildhall University School of Law in 1993, and was admitted as a lawyer in the United Kingdom the same year, having passed her UK bar exams with honors.

Katy practiced law in London for seven years, limiting her practice to family law and criminal defense work. She was a member of the Children’s Panel, a group of lawyers appointed by the court to represent children in complex family law cases. She also taught continuing education courses for attorneys in both family law and criminal defense work. Acclimatized to damp grey weather, but seeking more mountains and fewer people, she relocated to Seattle in 2001. She was admitted to the Washington State Bar in 2002. She is a member of the Washington State and King County Bar Association Family Law and Elder Law Sections, and has trained in mediation and collaborative law.

Once an enthusiastic world traveler, motherhood now limits Katy’s vacations to beaches, water parks, and beaches with water parks. She is a member of the Lowell Elementary PTA board, and of the viciously competitive pub trivia team, the Be-Hi Rollers.